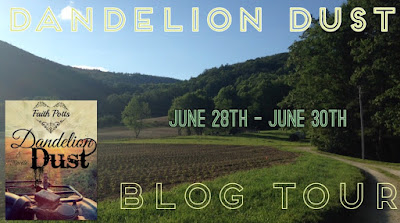 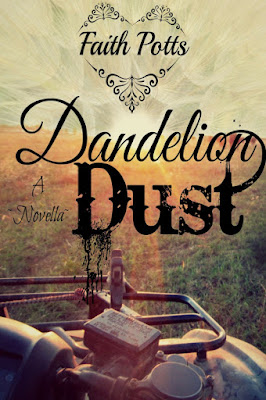 Like a speck of dandelion dust riding the tides of a prairie wind, life is fleeting. Though I never realized just how fragile it was until that day . . .Charity always had a dream. It was simple, really. Find a guy, fall in love, and get married.The day she met Ryder, Charity knew he was the man God had chosen for her. But she never expected their relationship to be tested and tried through the fires of a freak accident. Suddenly, her world is thrown into chaos, and the bleak, white walls and sterile smells of a city hospital fill every spare minute. And then there comes the dreaded news. It was likely Ryder would never make it out of the hospital bed.As her carefully laid plans for the future come crashing down around her and the sun seems to set on her dreams, can Charity still find hope in the dark of night?Like a dandelion, life is beautiful. But treasure every moment. . . for one day, the flower will be gone.

Interview:
This time, I'm doing something a little different: I'm gonna do a character interview with Drew, Ryder's older brother. So let's get started!

How was your relationship with your family impacted by the accident?
Ryder's accident drew us all closer together. We were pretty tight-knit before, but in a time that tried each of us in diverse ways, my relationships with my siblings and parents (and Charity) became deeper and stronger. More resilient, if you will.

What's your opinion of Charity, and what is one thing about her that makes you think she belongs with Ryder?
Honestly, I didn't know what to think of Charity at first. When we met, I thought of her as just another girl Hannah was friends with. Pretty soon, I realized she was a strong, godly young lady, not the giggly, teenage girl I was expecting.
Where Ryder's cracking jokes, Charity's bringing him back to earth. Where she has fears, he builds her up. They are the perfect couple for the ways they complement each other.

If there was one thing or event in your life that you could go back and change, what would it be?
Never agreed to go in half with Ryder when he wanted to buy that ATV? Haha, okay, that probably wasn't what you wanted to hear. :P
On a more serious note, I would go back to years before the accident and make sure everyone in my life knows what they mean to me. I always just figured my little brother knew how special he was, but until I feared I wouldn't get to make sure of that, I didn't give it much thought.

And lastly, what has God taught you through your experience in Dandelion Dust?
To not take those you love for granted. Just because you ate breakfast at the same table as someone, doesn't mean they'll be there for supper. As I said above, let them know what they mean to you. Second chances are gifts that aren't promised.

Thank you for having me, Miss Krispense!

Thank you, Drew!  All excellent answers.  No wonder all the girls like you. B-) 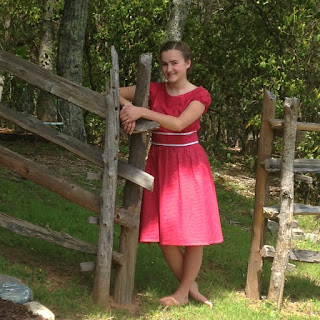 Faith Potts is a teenage writer, living with her family and beloved yellow labs in the southeastern US. When she's not writing stories, consuming large amounts of coffee, reading books, or creating pottery, she can be found laughing harder than is healthy, daydreaming, and – of course – blowing dandelions.

Also, Faith is giving away two copies of Dandelion Dust! Enter below: 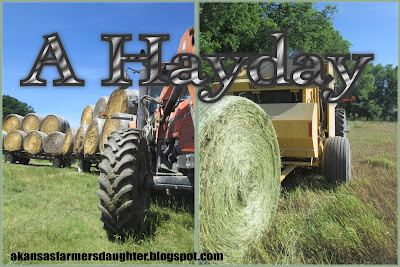 I should've gotten this post up earlier (I mean, I took these pics weeks ago. Plus, I've got my wheat harvest post to do.), but oh well.
I got to hang out with Kordell for a day.
You might be wondering from the title exactly what we were doing?
Well...
We had a hayday.  Literally.
First we went to get bales. 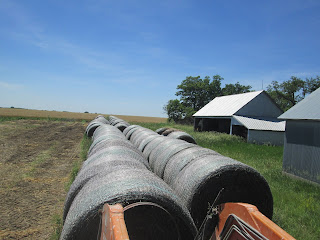 Kordell is quite interesting to ride with.  For instance, he was imitating the pig that cried 'wee!' all the way home on the Geico commercial… which made him cough but he didn't care. 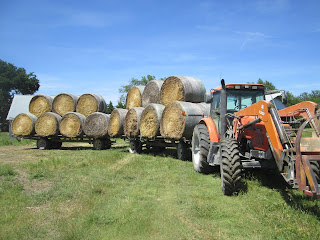 He would also imitate Jimmy & Jerry gourd from VeggieTales. 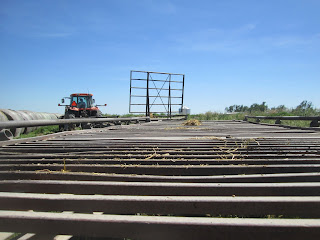 Once we finished hauling bales, we went home and switched tractors to go bale.

Singing along to Sawyer Brown…
He also sang parodies of Old McDonald that he made up on the spot. 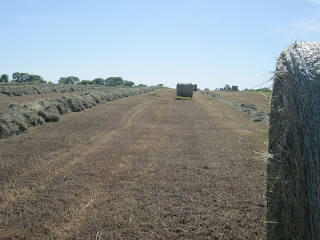 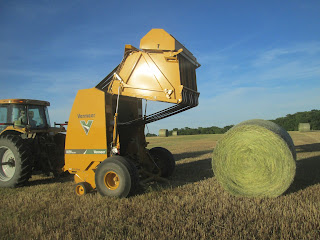 I tried to yodel, but he said, "you sound like a caribou." He was right. XD 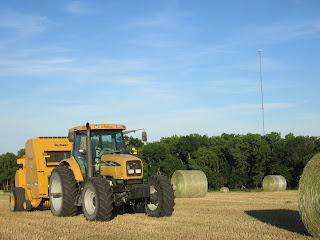 It was an interesting day, to say the least. ;P (Especially when we were all done with the field.  Going around in random circles to pick up stray hay is not for the faint at stomach! XP)
But thanks for letting me ride, Bro! I did have fun. ;)
~Kaitlyn
Posted by Kaitlyn Krispense at 9:21 PM 3 comments: 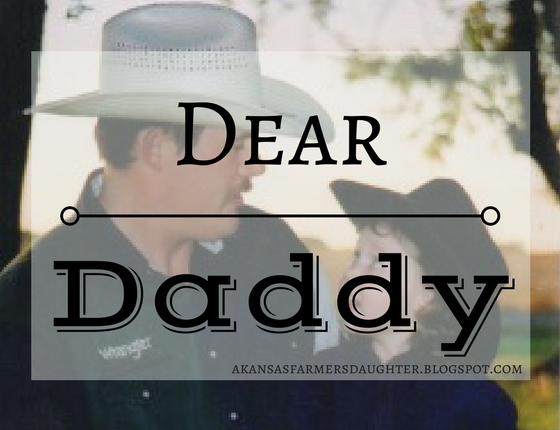 Dear Daddy,
How can I put this into words?
Mama became 'Mom' or 'Mother' or 'Ma' or whatever I wanted to call her in less than 15 years.  You've always been Daddy, and I think you always will be.
You're the kind of guy that most people think is grumpy all the time, just 'cause of the way you look.
I know different.
Of course, you've still got that glare of purest steel that scared the living daylights out of me when I had done something wrong, and I'll never forget that muffled snap of the fingers we'd get as a warning when we were acting up in church.
But you've also got that laugh, and smile, and that smirk you get on your face and sparkle in your eyes when I know you're just teasing me.
You're the one that wouldn't allow me to wear skirts too short, shirts too low, or jeans too tight.  You're the one that taught me how to ride a horse, and how to ride a bike.You're the one that always says, "Kaitlyn, when a guy comes calling, I'm looking forward to telling him no."
You've never been afraid to play with us kids; you'd play with our toy farm equipment with us, you'd wrestle with us, give us 'horsey' rides.
You're gentle.  I remember that when Mom would brush my hair, I would be screaming because of the pain.  When you brushed my hair, somehow it didn't hurt as bad.
When I would have nightmares, I would run to your bed, and you would let me sleep with you for the rest of the night.  Even if it squished you and Mom.
Some people would call you strict.
I would call you... well, strict.  But in a good way.
Remember your favorite verse?  You certainly lived by it. XD  But you disciplined us in such a way that we knew exactly why we had gotten the punishment we had gotten, and that we had brought it upon ourselves.
You've always been super patient, and y'know, I don't remember you ever yelling at us.  You never lost your temper, even when us kids were being brats, and when we would 'help' you stack square bales, although we were just being in the way.
You taught me to drive tractor and move bales, and never lost patience when I made crooked rows or turned a bale on end, going at a snail's pace the whole time. ;)
You are the one person in the family that has ALWAYS shared my love for old western TV shows.  Sure, everyone else likes them, but when we're looking for a movie to watch, you almost always take my side. ;)
One night, I had really been looking forward to watching a western.  But everyone (including you) were already in bed.  So when I came to tell you goodnight, you offered to get up and watch one with me.
I declined, but… I went to my bed and just started crying.  Not because I was missing a western, but because my daddy loved me enough to actually be willing to miss some sleep for me.  That meant more to me than you'll ever know.
You've always loved us, and make sure that we know that.
You took up being the spiritual leader of the family, and helped lead me to Christ.  You pray with us, read Bible to/with us; you're the role model that every child needs, and then some.
Daddy, you'll always be my first love.
I love you.
~Kaitlyn

Posted by Kaitlyn Krispense at 4:00 AM 2 comments: