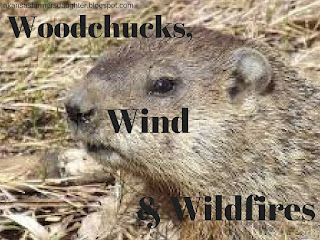 Well, since I don't really have anything to say right now, let's get on with the recap, shall we? ;)

Life/random (in no particular order):

-March was the windiest month of the year so far.  KS is known for wind; especially in March every year.

-We need to keep the people that were victims of the wildfire(s) in our prayers. The one at Ashland in western KS was said to be the biggest grassfire in world history.

-We found out that Siri has several answers to the question, "how much wood could a woodchuck chuck if a woodchuck could chuck wood?"

"Well, since a 'woodchuck' is really a groundhog, the correct question would be: how many pounds in a groundhog's mound when a groundhog pounds hog mounds?"

"I suppose it depend on whether you are talking about African or European wood."

"None.  A 'woodchuck' is actually a groundhog, so it would probably just predict two more weeks of winter."

"Assuming a spherical woodchuck in a vacuum... about 42."

"Just because it could doesn't mean that it would."

"A so-called 'woodchuck' (correctly speaking, a groundhog) would chuck — that is, throw— as much as the woodchuck in question was physically able to chuck if woodchucks had the capability (and, presumably, the motivation) to chuck wood."

And eventually, after you ask it enough times…

"Don't you have anything better to do?"

"I imagine that groundhogs would prefer a different question for a change." 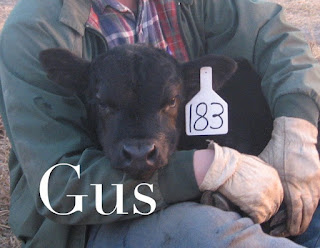 -I discovered that Snoopy, Charlie Brown's dog, was named after a WWI pilot.  The song "Snoopy's Christmas" was written about that pilot.

-Our church had a potato bar. Butter, ham, broccoli & cheese, bacon bits, chili... it was delicious.  And some of us got to be a bit of entertainment! Just in case you're interested... 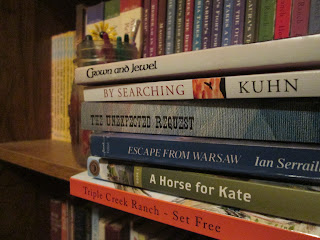 I didn't do a whole lot of writing this month, and to be honest, I enjoyed my little break thoroughly. XD
These snippets are from a scene I wrote for Faith's Imagine This challenge.
If you'd like to read the whole story, click here.
And now, on to the snippets!

“Ouch… ouch… ouch… oww!” Jerry tried not to scream as he gingerly opened the hatch again.  He pulled himself up out of the turret to sit on the rim and carefully inspected his now-bloody knuckles.  “I must be the only person that keeps smashing his hands under a tank’s hatch,” he muttered.
With a sigh he wiped the blood on his pant leg and hopped to the ground.
Rounding the corner of the tank, he barely saw the cannon arm before it crashed into his forehead with a dull clunk!  Jerry bit back the shout that rose to his lips, though a loud groan escaped.
“Jerry, what the—”
Jerry whirled around.  “Toby, don’t say one word.”
Toby’s eyes twinkled.  “What’s the other guy look like?”

Trent gently took Jerry’s hand in his to examine it.  “You’ll be fine after a few days of soreness,” he announced.  He set his pack on the ground and, bending over to pull something out, Jerry saw a pen fall out of his pocket.  When it hit the ground, the cap flew off and Jerry noticed a small piece of paper sticking out of the pen.  Trent glanced down at it, then casually but quickly covered it with his booted foot.  Jerry momentarily wondered about it, then dismissed it with a shrug.
“Here we are,” Trent straightened, a roll of gauze and a bottle of antiseptic in his hands.  He quickly disinfected Jerry’s knuckles and wrapped some cloth around it.  “And there you go.  You’ll be good as new in a few days.”
“Thanks,” Jerry said with a grin.  He turned and walked away, glancing back once to see Trent rapidly snatch  up the fallen pen and place it back into his pocket, eyes darting from side to side rapidly as if he hadn’t wanted anyone to see.
That’s weird. Jerry shrugged and moved on.

Pun of the Month:

I tried to catch some fog but I mist.

Well people, have you ever sung in a choir?  Asked Siri a question and received a funny answer?  Read any of the above books?  I'd love to hear about it! ;)
~Kaitlyn
Posted by Kaitlyn Krispense at 9:01 PM