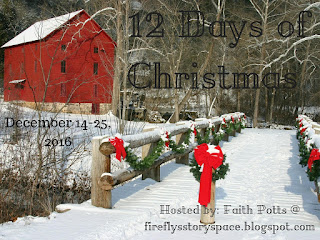 Today, I'm excited to join the 12 Days of Christmas hosted by Faith!
So, today through Christmas Day, I will (hopefully) be posting something every day, including a new story, a couple of reviews, songs, and more.  Today I will start my new story, Katie's Christmas.  Yes, this is a sequel to Katie's War.
So, here's part 1, and I hope you enjoy!


Katie sighed.  “Let’s go downstairs and see if your daddy can explain it better than I can.”

Posted by Kaitlyn Krispense at 8:09 AM